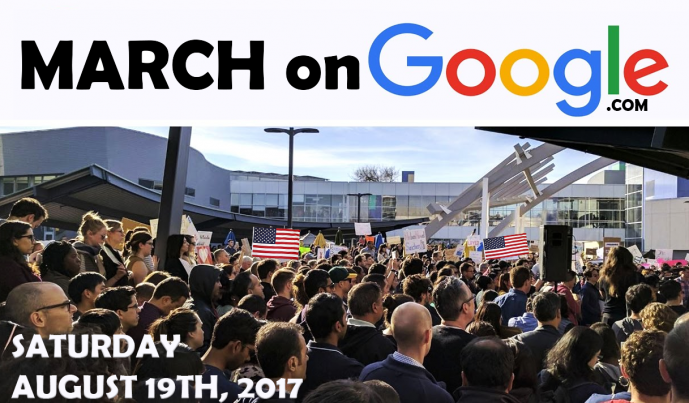 It’s time to dismantle the tyranny and bring down Google, the evil deep state entity that has a near-monopoly over the web. By pursuing a radical agenda of left-wing extremism, Google has become an evil, dangerous entity run by bigoted lunatics who are now systematically censoring all websites and video channels that do not conform to their twisted, anti-American agendas.

It’s time to March On Google and end this tyranny against humanity. In the spirit of abolishing Apartheid, we must dismantle Google and bring an end to its reign of censorship and tyranny that threatens the very foundation of free societies.

“Protesters may also be exercising their free speech rights, which Google does not respect, by protesting in front of the homes of Google’s executive team,” explains MarchOnGoogle.com. Home addresses of Google executives have not yet been published, but keep checking MarchOnGoogle.com for updates. It’s time to confront Google executives for their complicity in carrying out extreme evil and tyranny in our world. In the same way that previous generations were forced to confront Stalin, Hitler and Apartheid, we must now confront and dismantle Google.

Here are the address details: You may also march on Google offices in other cities

Click this Google maps link for the locations of Google offices to protest.

They include Dallas, Boulder, Chicago, Miami, Toronto and many more. It’s time to end the evil reign of Google and its dangerous, left-wing cult of censorship and oppression.

If you work for Google, you are an evil person who is taking part in the oppression of freedom and democracy. Prepare to face the truth about the extreme evil to which you have contributed.